Growing Potatoes In Your Garden, How, When and Where To Grow Them

Growing your own potatoes provides a staple vegetable that does require some effort to grow but supplies a good yield for the effort. The taste and texture of early new potatoes are undoubtedly at their best straight from the garden.

There are three groups of Potato these are early, second early and maincrop. You get faster growth but lower yield the earlier the variety.

If you have limited space then it is best to grow earlies as these are ready to harvest when the prices are high in the shops. A 3-metre row will need 1 Kg of seed potatoes.

To keep a family of four with a continuous supply throughout the winter and spring you will need 80 sq m of space with the following quantities of seed potato: Earlies 8 kg, second earlies 20kg and Maincrop 10kg. 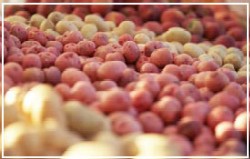 Choosing and Preparing a site

Although potatoes are not too particular about soil types, be careful in your chose of variety on heavy clay soils. The earliest varieties do prefer lighter soil. The site should be open and not overshadowed by trees, walls or buildings.

The ground for growing potatoes should be well dug and treated with a moderate amount of well-rotted manure or compost. They should not be grown on ground that has been limed as this encourages attacks of scab. Also, avoid growing them on the same ground that was used for legumes the previous year as these fix nitrogen into the soil which will cause the plants to grow extensive haulm (the upper part of the plant) at the expense of the tubers.

Seed potatoes are dormant tubers know as sets. Sets should be about the size of a hens egg, any that are larger may be divided as described below. It is best to buy new sets each year as this reduces the risk of disease, however you may grow from your own tubers every other year.

Place the sets in a light, well ventilated, frost-proof environment, they can be put in trays or empty egg-boxes. The set will have “eyes” or dormant buds crowded together at one end this end should be at the top when the set is placed in the tray. This process called “chitting” normally takes about six weeks and gives both an earlier and heavier crop.

The sets are ready for planting when the sprouts on them are 3cm long, before planting you need to remove all but two or three of the sprouts by gently rubbing with your thumb. The first to remove is the one at the very top, then remove any that are still white followed by those that are least promising. Cut large sets into pieces with each having two or three good strong sprouts.

Early varieties should be planted at the end of winter, ideally, the ground should be sheltered. Second earlies and maincrop follow at monthly intervals.

So that each plant gets the maximum amount of sunlight potato rows should run north to south, this also avoids shading other crops. Earlies should have rows spaced at 50 cm (20 inches) whilst the maincrop should be spaced at 75 cm (30 inches) between the rows.

The sets are sown in V-shaped furrows at a depth of 8cm for heavy soils up to a depth of 15cm on light sandy soils. The use of a dibber is not recommended as this is liable to leave an air space underneath the tuber. To help prevent potato scab scatter lawn clippings thinly in the furrows, then cover with soil by raking level.

If there is any chance of frost all potatoes need to be protected as once the shoots have broken the surface any wind or ground frost will burn them back. This will mean at least a three-week setback. Draw up a little soil to cover the shoots when there are only a few cm high.

When the haulms (shoots) are 20cm high draw up more soil to form a ridge along the row. This will encourage heavier crops as the tubers are formed at the underground joints in the haulm, so the more of the haulm that is underground the more joints that can form tubers.

Earthing up, the name given to the above procedure, also prevents the tubers from turning green due to exposure to light, (green tubers contains a poisonous substance). Throughout the growing season loosen the soil between the rows and gently draw up the soil on both sides of the haulms leaving the top 15cm uncovered. Remove any flowers that appear during growth.

All of the plants should start to turn yellow at the same time, any isolated plants that do this should be viewed as being diseased. Cut down the tops and burn them however the tubers can be left in place to mature.

As early varieties can be eaten immature in early summer carefully lift a couple of plants to see if they are ready, if not they can be covered again. You can also unearth by hand and just pick the tubers you need replacing the soil so that the rest of the tubers and continue to grow.

Early potatoes lose their flavour quickly so it is best to lift them day by day as they are needed.

It is essential to remove ALL tubers and parts of tubers as they will cause a problem growing up through next years crops and also this spoils the principle of crop rotation. Never use the haulms on the compost heap burn them instead.

Later crops need to be stored before using. After lifting let the tubers dry out on the ground for a couple of hours but NO longer. Take indoors and clean off by hand any soil that is stuck to the tubers at this time discard any that are diseased or damaged. Boxes or paper bags will do to store the potatoes in but make sure they are kept off the ground. They MUST be stored in the dark and protected from frost and draughts.

There are three main soil-borne pests that attack potatoes Eelworm, Wireworm and Slugs, all three damaged the tubers by boring into them. Crop rotation is very important in preventing these pests from becoming a severe problem. Most early varieties seem to be rarely attacked. Slugs and wireworm are more of a problem in wet summers and heavy wet soil. The major air-borne disease is Potato Blight and is hence the most common one faced by the home grower.  It is a fungal disease that is most prevalent in warm wet conditions e.g. what we call summer in Britain.